The Board of Directors for the Charleston Coliseum and Convention Center honored Charleston Mayor Danny Jones and long-time center General Manager John Robertson for their leadership in the completion of the recent renovation project of the facility.  Prior to a board meeting today (Dec. 4), board chairman Andrews Jordon unveiled bronze plaques in honor of both leaders.  They were produced through Sears Monuments and are displayed in the hallway to the right of the Quarrier Street lobby of the Civic Center.  The inscription on each plaque follows:

The longest-serving Mayor in the history of Charleston, Danny Jones understood the economic importance of attracting visitors to Charleston for conventions, special events and memorable occasions with family and friends.  As the leading advocate of Charleston’s tourism and hospitality economy, Mayor Jones led City Council to approve a financing plan for a $100 million renovation and improvement of this facility from 2015 – 2018.

The longest serving general manager of the Charleston Civic Center, Charleston native John Robertson managed the facility through several significant improvement projects.  Between 1978 and 2000, John oversaw the addition of the Coliseum and renovations of the  Grand Halls and Exhibit Halls.  A $100 million expansion was completed in 2018 as John celebrated 40 years as general manager, which made the Charleston Coliseum and Convention Center the largest, most state-of-the-art facility in the West Virginia. 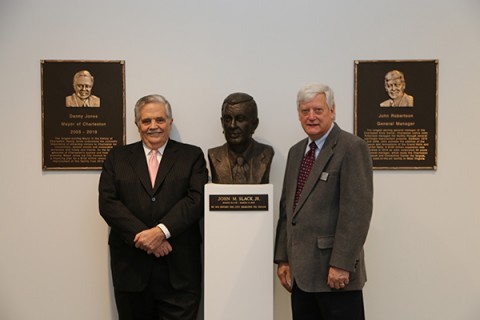