PUBLIC ART TO BE INSTALLED DURING CITY-WIDE CLEAN UP

The City of Charleston’s Office of Public Art, in coordination with several local artists, will continue its installation of artwork during the April 20 Team Up to Clean Up city-wide clean up. Three artists will create in-place murals on Charleston’s West Side April 20.

Artist Kayleigh Phillips will install a tiger portal at 800 Hunt Avenue at 10:00 a.m. Phillips works as a graphic designer and tattoo artist. Her unique style can also be seen around Charleston as she has painted several murals and completed vivid sign restorations.

Painter and designer, Debra Rayhill will create a female portrait on 802 Matthews Avenue at 10:45 a.m. Using materials like epoxy resin, gold leaf, and patterned paper, Rayhill creates nontraditional watercolor portraits that focus on the differences of the same thread - the human face.

A female silhouette, designed by artist Staci Leech-Cornell, will be installed at 800 Barton Street at 11:30 a.m. Leech-Cornell is a graduate of the Marshall University’s Masters of Arts program with an emphasis in sculpture. She creates illustrations and other paper artworks and has been featured in publications like Uppercase Magazine and WV Living Magazine.

In total, eight artists will create “in-place mural projects” around the city. These murals use vines, trees and bushes to help transform nature into artwork. During the East End clean up, Geraldine the Giraffe by artist Rob Cleland was installed at 1570 Virginia Street and Bob Ross was installed by artist Jeff Pierson at the East End Bazaar. Sandra the Squirrel was installed by artist Mallory Burka during the clean up in Kanawha City April 13. Other artists that will be taking part in the “in-place mural project” include Amanda Jane Miller and Blake Wheeler. Details on the other artwork coming to Charleston will be forthcoming. 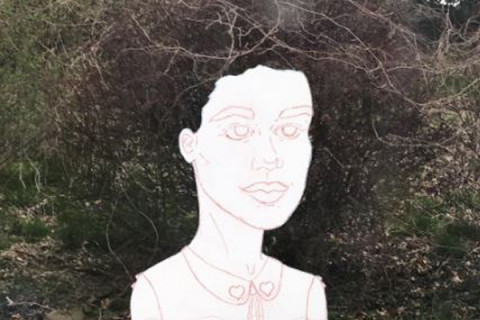