Mayor Amy Shuler Goodwin announced today she will present a plan to Charleston City Council to allow the City to significantly improve efforts to address vacant and abandoned properties. Council will be presented with two bills – one increasing fines on vacant properties and one establishing a Land Reuse Agency (LRA). The LRA would help manage blighted properties throughout Charleston. While demolitions will continue, the LRA would also encourage the rehabilitation of dilapidated buildings.

“We receive calls, daily, from folks regarding vacant and abandoned houses. It’s an issue that has burdened our neighborhoods for decades,” said Mayor Amy Shuler Goodwin. “These bills will provide our Building Commission and Planning Department the tools they need to hold folks accountable. The Land Reuse Agency will then give the City the ability to more effectively and efficiently address individual properties and clean up our neighborhoods with options for rehabilitation.”

In 2014, the West Virginia Legislature authorized municipalities to create LRAs, which are often called Land Banks in other states, to provide a greater ability to confront the problems caused by vacant, abandoned, and tax-delinquent properties.

“The increase in fees will cover a greater portion of the costs the City incurs in addressing these structures and motivate positive action,” said City Attorney Kevin Baker. “At the same time, the Charleston Land Reuse Agency will provide a conduit for the City to acquire property and use new tools to encourage redevelopment.”

Creating a Land Reuse Agency and the steps the City takes to implement it will also create better coordination of City departments as they address properties moving forward. The City will have greater planning and analysis of properties both inside the LRA and within each department.

The bills will each be introduced and referred to committees today, August 5, 2019, with committee and Council action to follow. 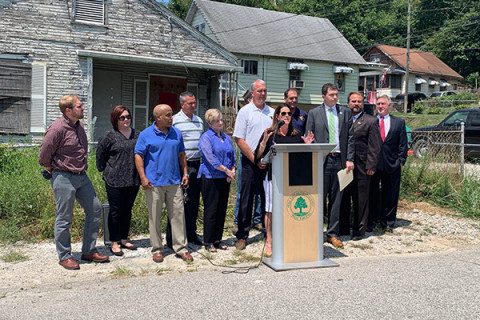