Mayor Amy Shuler Goodwin, alongside Myron Boggess of Charleston Professional Firefighters Local 317, announced a $1.7 million-dollar agreement between the City of Charleston and the Union, subject to approval of Charleston City Council.

In late 2011, Charleston City Council approved changes to the way firefighters were compensated for holidays. The measure went into effect January 1, 2012 and Charleston firefighters have been paid incorrectly for holidays since then. This change directly contradicted state law, which led Mayor Amy Shuler Goodwin and her administration to negotiate a correction with Local 317. The agreement between the City and Local 317 addresses the back-payment discrepancies and makes changes moving forward for future holidays that is in line with state law.

“Our firefighters deserve to be paid fairly and in accordance with state law,” said Mayor Amy Shuler Goodwin. “My administration has been working diligently with Charleston Professional Firefighters Local 317 for months to correct this problem made years ago and pay our first responders what they are owed.”

The Goodwin administration prioritized correcting this action and worked directly with representatives from Charleston Professional Firefighter’s Local 317 to create an agreement and makes changes moving forward.

For his part, Myron Boggess, President of IAFF Local 317 said: “The union members are grateful that the City has deliberately set out to correct this issue and that the City worked closely with the Local 317 Leadership and its representatives to solve this in a way that benefited rank and file Charleston professional firefighters. The union and the City worked together to resolve this issue to everyone’s benefit, so that we can all move forward in a positive way.” 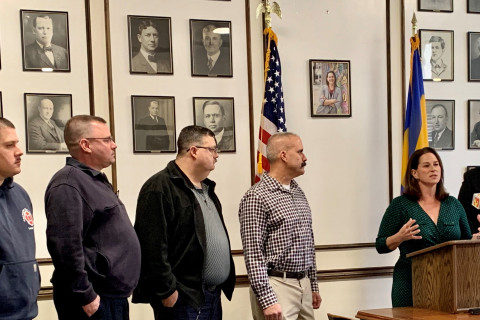