Mayor Goodwin and city representatives held a press conference at 605 21st Street in North Charleston today to discuss the strides the Land Reuse Agency and Vacant Structure Registry are making in our communities.

During the most recent City Council Meeting, Charleston City Council appointed the Board of Directors members for the newly-formed Land Reuse Agency. Councilmembers Will Laird and Ben Adams will serve as City Council representatives while Chris Campbell and Marylin McKeown will serve as citizen representatives. Mayor Amy Shuler Goodwin, City Manager Jonathan Storage and City Attorney Kevin Baker will also be part of the Board of Directors, pursuant to City Code, Sec. 65-3.

“The City of Charleston has long been putting band-aids on things that needed surgical procedures,” said Mayor Amy Shuler Goodwin. “Establishing a Land Reuse Agency is a key part of my long-term vision to improve housing and community space in Charleston. I am excited to get to work and have such a great group of folks working on the Land Reuse Agency Board of Directors.”

“Implementation of the Land Reuse Agency and the new Vacant Structure Ordinance are important steps along the way toward strengthening Charleston’s neighborhoods,” said City Attorney Kevin Baker. “While this won’t be a quick process, we are committed to working hard with the Board and all of our City agencies to make it a successful process.”

“The Building Commission has seen a significant increase in building permit applications for complete renovation of vacant structures in the past two to three months,” said Building Commissioner Tony Harmon. “I believe some of this is because of the new Vacant Structure Registry. With the letters that are being sent out we expect further positive action.”

On Tuesday, October 15 at 10:00 a.m., 605 21st Street in North Charleston, the same property that was used as a backdrop when the Land Reuse Agency was formed, was torn down following the press conference 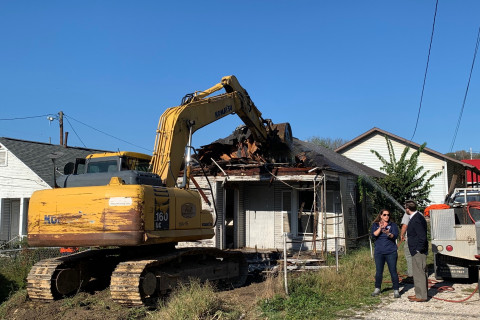