57TH STREET PARK TO BE RE-DEDICATED

Mayor Amy Shuler Goodwin, along with members of Charleston City Council, re-dedicated the park located on 57th Street in Kanawha City today. The park was re-dedicated in honor of three children who passed away in July of 1973 in a flash flood.

“We help carry on the legacy of the Hunter family through this newly-renovated park,” said Mayor Amy Shuler Goodwin. “It is now a place children throughout our community and the surrounding areas can come to laugh, play and have fun.”

In July 1973, Annetta (9), Anthony (4) and Prince Hunter III (6), all of the same family, perished when a torrent of water swept through the area surrounding 57th Street in Kanawha City. Five inches or more of rain fell within two and a half hours causing flash flooding and the collapse of the mountainside beside the Hunter home. A fourth sibling, Veronica (10), was swept 100 yards downhill but survived the incident. While flooding caused widespread devastation to cars, homes and roadways, these were the only injuries reported.

The park was officially dedicated in the fall of 1973. Throughout the years, the park had become outdated and in need of repairs. The original plaque that had once been part of the park had also been stolen. The City of Charleston has restored the park over the past few months to make it a fun, safe place for children in the Kanawha City and surrounding areas to play. 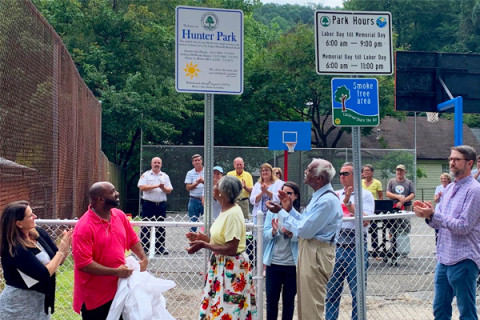